It is not uncommon for people to accumulate many matches—more than they will ever need to use.

In general, you can throw away unused matches. Before throwing them away, you need to soak them in water. This will make them unable to ignite in the trash. Used matches should be allowed to cool or be extinguished in water before you throw them away.

Of course, you probably do not want to have a ton of matches sitting around your home that you will never use. This begs the question; can you throw away unused matches? Well, let us answer that for you!

You can. Although, you will need to take a few precautions before you do it. We will talk more about that in the next section.

What you have to remember is that matches are flammable. They have been built to ignite. If you throw the matches away ‘as is’, you will run the risk of them igniting.

We have heard horror stories of people throwing away their new matches without preparation. The result? They ended up with garbage bags that caught on fire.

Remember, all it takes is a single match sparking up to set the rest of your garbage on fire. If you do not catch the flames quickly, it won’t be long before the fire is out of control.

Remember, sparking up a match only takes a small amount of energy. Some people have reported the matches sparking up the very second they throw them into the garbage.

You also need to remember that they may not just light up on your property. They could light up in the garbage truck or even at the landfill. Neither of these is going to be a good situation. 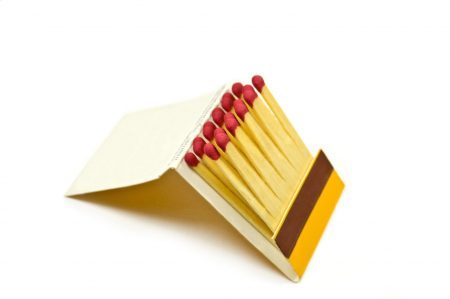 A fire like this could easily cause more destruction than a fire in your home. Thankfully, there seems to be no evidence of this ever happening.

Now, we want to point out that the chances of the matches randomly lighting themselves up are slim. The risk goes down even further if it is a safety match.

They need a lot of energy if they are to be lit up without a proper igniting strip. However, the risk is there. If the risk can be eliminated by preparing the matches for disposal, why wouldn’t you do it? It takes a couple of minutes, at the most.

Of course, the risk increases the more new matches you throw away. Most people wondering about throwing away unused matches tend to be throwing away dozens and dozens of boxes or strips at a time. That is where the real risk is.

If you want to throw away the new matches in the standard garbage, then you need to do something which will take a couple of minutes, at the most, to prepare.

The soaked matches can’t light. This means that they can be safely disposed of.

This will not have much of an impact on those ‘weatherproof’ matches, but since these are quite expensive to buy, most people probably wouldn’t be throwing them away anyway. If you want to dispose of weatherproof matches, your only option is to burn them off.

You do not need to bag the matches when you throw them away. You can throw them into the standard garbage without any issues.

Putting them in a bag does nothing more than create extra waste. The risk of the matches catching alight has now been completely nullified. They do not need any extra protection on that front.

There is an alternative option, and that is not to throw them away at all. No. We don’t mean that you will need to keep new matches in storage for the rest of your life. Instead, you can burn them.

If you have a fire in your home, throw the matches on the fire. They will burn off quite quickly.

Try to avoid throwing boxes and boxes of matches on the fire all at once. This could cause issues. However, allowing a couple of boxes to burn off before you add some new ones should be fine.

Alternatively, you can burn them in a fire outside. You can throw as many matches on the fire as you like if you do that.

Can You Recycle Matches?

No. Matches are classed as general recycling in most areas.

Some matches are made of wood. However, this does not mean you should add them to wood recycling, even if they have been recycled.

They are completely useless for wood recycling. We can assure you that most recycling centers wouldn’t be best pleased if you decided to add something flammable to their woodpile.

If you throw away matchboxes (without the matches), you can remove the ignition strip on the box. This box can then be added to the paper or card recycling, depending on what it is called where you live.

Can You Throw Away Used Matches?

Once a match has been used, there is no risk of it lighting up again. The only way that match will be on fire again is if it acts as kindling for another fire. This means you can throw away used matches to your heart’s content!

So, there you have it. It is completely fine to throw away unused matches. You will need to do a bit of preparation if you want to ensure that they will not combust spontaneously.

All this means is soaking your matches in water. Once this is done, you can throw them into your standard garbage. You can recycle the empty matchboxes if you want to. Make sure you remove the ignition strip on the side before doing that.